Our first couple of meetings have been held. A hangouts group is in full swing. Code has been written and motors are turning.

In the series of blogs I hope to add more technical design information, pictures, video, podcasts as we try to answer the questions :-

How can we overcome last years issues?

Should we build a whole new robot this year ?

Should we change the type of motors ?

Should we retire the NERF attachment ?

What can we do with the new theme ?

Who is James, and how will he get faster Internet to his workshop ?

Why does WordPress refuse to immediately publish posts in the 1 hour before the clocks change and instead leave them stuck in scheduled state?

Should we build a robot in the shape of a traditional “Caber” and get it to “toss” itself around the course ? (probably not tbh).

When will my cat stop climbing on me ?

Phew. Well. That was a stressful day !

So to cut a long story short, we suffered a change control induced issue which led us to forfeit most challenge, but in the end we finished 6th out of 9 in the pro category.

The highlight must have been driving around the the multimeter taped to the back of it 😀  It did not really solve our problems, the pi kept rebooting.

We did do quite well at the shooting, 3rd place 😉  (non mobile users, rotate your screens now, some heathen filmed it vertically 😉 )

Our finale was Matt expertly navigating the obstacle course, who made second place 🙂

LOTS of improvements next year, some new team members, a whole new robot ? I hope to back blogging and helping on hardware and driving.

Even after some setbacks the team is not deterred and are back for another weekend spent working on the robot. The speedtest is at least working pretty well (the upstairs Makerspace floor could do with the same treatment as downstairs).

IMS Rover has been through a rebuild in the recent weeks. We have been previously testing in the “bird nest” configuration.

Through Matt’s hard work we now have the “cable managed” configuration, with the batteries underneath.

The last few weekends the team has been trying to fine tune the maze, here is Mal trying to understand the sensor readout.

Get that man a hat !

The rebuild had not gone fully to plan. The wheels have not been running concentric. Matt turned some new hubs but first struggled with the new hubs rubbing on the chassis fixings, a quick lathe adjustment later and that problem was solved!

The team is struggled for a while with the sensors being damaged and dusty. GRrrrrrr. Jon has been tinkering with the Maze code and playing with the acceleration, alignment, sensor settings, wall tolerances etc. and now finally the robot has at least got round the maze once!! Progress 🙂

Another session working on the PiWars robot for 2019. Matt has been 3D printing a new case.

I must say its looking pretty good. The robot now officially has a new name the “IMS Rover”.

The team suffered only a minor set back. It was so soon after the robot got a new housing and a new name that a strange smell started to emanate from “IMS Rover”, maybe we should have called it “Sparky”.

After some sniffing Matt and Jon discovered the front LED ring was rather hot and melting the case. Unfortunately during the troubleshooting process the 12V from the battery pack got applied to the Pi and a small fire was seen. So long Pi. I was practically useless and was just taking photos of the aftermath for the blog and partially for my own amusement 🙂

The Pi is dead. Long live the Pi.

Never fear! Matt had a spare Pi ready to go and got to work getting it installed. The Pi is dead, long live the Pi.

It wasn’t long before the electrical gremlins returned, as IMS Rover started eating the Raspberry PI cameras. Fingers crossed it doesn’t return! Moving swiftly forward the IMS Rover has now been helpfully labelled so we know which way to set it off 🙂

Firstly one has to mention the AMAZING makerspace floor in the new downstairs area, it is looking fantastic indeed. Many hours have been spent sanding and varnishing. Oh yeah and the team now sort of has a maze. It needs a little more work.

Some chop sawing later and a new maze was ready, then came the fun of trying to get IMS Rover to navigate itself around the course.

OK, so not looking too hot just yet, some more work is required here X-D

Until next time… Ta ta.

Back from the Christmas break with a quick update, the team has not only been working hard expanding the Makerspace and drinking it’s Mead, but also working on Tractorbot 2019. Matt and Jon have been testing the motor controllers with the new wheels. In our latest video we show off the strafe capability.

The guts of Tractorbot 2019 is looking a bit like this at the minute. Somehow all those little white connector blocks fit 😀 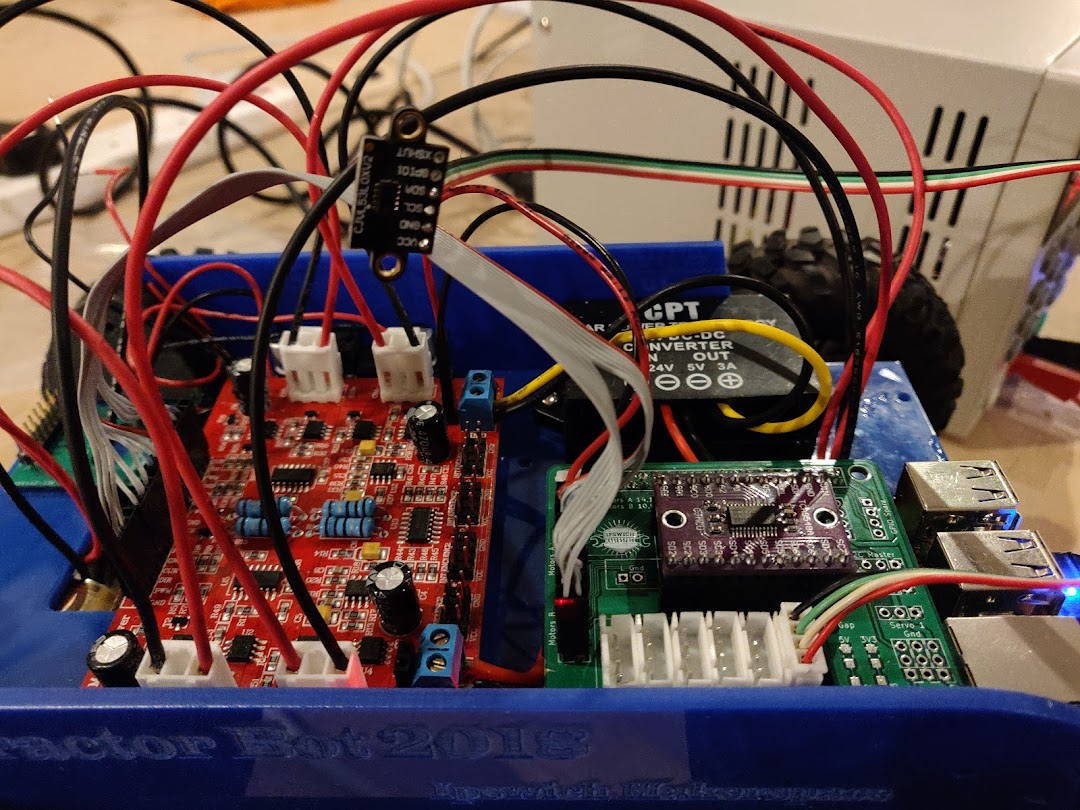 Lastly here is sneak preview of design for Tractorbot 2019. 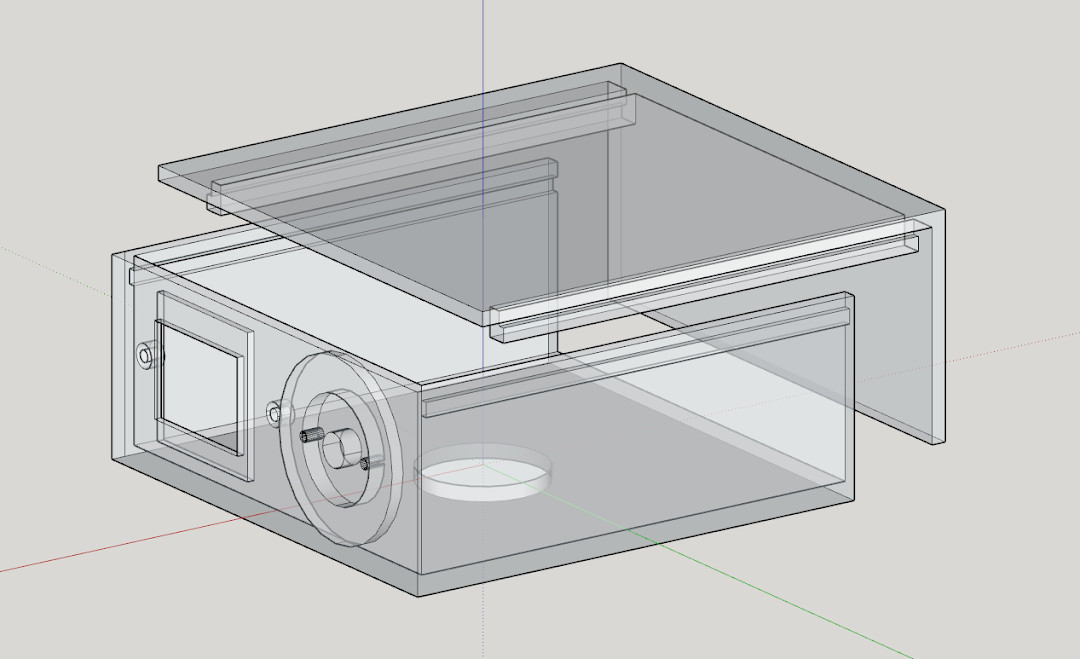 Hopefully in our next blog we will be building challenges and testing and showing you the finished Tractorbot body for 2019.

PCBs arrived from jlpcb.com, looking pretty good. OK so they are a bit wrong in places and not well labelled, but we got them quickly 🙂 Im sure it can be quickly adjusted if needs. These were 10 fro $10 including DHL shipping in 5 days! which I can hardly believe.

They fit in the old robot chassis, and I am told motors are working!

v0.4 is in design phase to fix the positioning of the time of flight sensors, so they actually fit next to each other!

Meanwhile Matt has been lathing some wheel parts.

A somewhat artistic shot of the lath

That is all for now!

Mal had made a proposal to upgrade the Nerf gun for the Space Invaders Challenge! At a firing rate of about 6 per second, “The Judge” can output 30 shots into its enemy in well, not much time at all.

Too much or not?

More seriously though, v0.2 of the Connector Board is ready for review featuring : New layout, removal of unnecessary connectors, 2 more “time of flight” sensor connectors and a tidy up of the track routing.

Next job is to adjust the text on Front Silk to identify the i2c channels easily.

Matt has wired up the time of flight sensor boards.

The team is making progress..

Inbetween procrastinating and discussing how to build a 22ft Stargate Christmas Tree, the team has actually been making some progress.

Mal has been prototyping some Pi HAT modifications from the last year design to accept a (physically) larger I2C expander, time of flight sensors and dedicated servo connectors.

We started with Matt’s sketch..

After some time in KiCad, Mal has come up with a v0.1, which will be subject to more modifications, so he is told!

Matt has been playing with wheels and thinking about new motor controllers. These are Mecanum wheels and will allow our robot to gracefully strafe left and right.